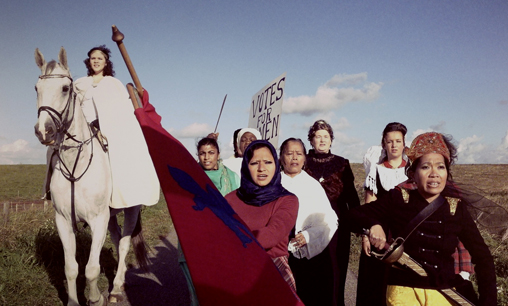 With pride we present our film Ahoy! unsurpassed women of the world. The film is about a young woman who’s inspired by the lives of heroines. When  the leadroll dreams, some heroines come alive. Eventually the main character makes a decision. In this film we honour female leadership and courage of women all over the world and show their relevance for women in our time.

The idea of the film  came  as a result of a year project “Heroines Woldwide” from our Dutch Women´s organization Zeeuwse Wereldvrouwen. Our women’s group is located in the south of the Netherlands, the province Zeeland (Sealand). We live on a peninsula. We meet every week and the participants are Dutch women and women from all over the world, young and old etc. The goal of our organization is to empower women  and to increase awareness in society about the role of women. We work through education, art, film, poetry and with projects. At the moment we’re working on the project Silent Voices about violence against women. The exposition will open on March 8th, International Womens’ Day 2014.

During the year-long project “Heroines Worldwide,” all women chose  a heroine from their own original country and shared it with the group. In this way we got to know many unknown heroines. We made a Wall of Fame in our room where we have our weekly meetings.

For most of us, Inez Milholland was totally unknown. We were excited when we heard about her. Her story is so inspiring and visual. We definitely wanted her in our film. We found out a lot of heroines who died young and dedicated their life to womens’ rights.

Making the film was a real adventure. We did everything ourselves. The film is entirely shot on iPhone. And women of our group played the heroines. We asked the community to help us with locations and horses.

This project has really changed us. Actually, playing the heroines, literally crawling into their skin, changed the spirit of our group. On the 14th of February 2014, we joined the One Billion Rising movement and we went on the streets to demonstrate against violence  against women, and we also danced Break the Chain. With us was a Dutch heroine Aletta Jacobs  (also in our film) she came to life, to demonstrate with us and hold a speech for the public. We are not to be stopped now. Thank you, Inez Milholland, and all the other heroines.

The film has shown at Film By the Sea in Vlissingen and Cineffable, Filmfestival International Lesbien et Feministe du Paris.
www.roslinprager.nl       http://vimeo.com/61417700