People at the Center of Women’s Suffrage, by Deborah Kops, Blackbirch Press: 2004

Rather than covering the suffrage movement as a whole, except for an overview at the beginning, this book gives short profiles of fifteen women important in the struggle.  I appreciated that instead of starting with the Elizabeth Cady Stanton/Susan B Anthony/Lucretia Mott era, the work begins much earlier: it includes information about Margaret Brent (“First American Woman to Demand the Right to Vote,” in the 1600s) and Mary Wollstonecraft (“Her Writing Inspired Early Suffragist Leaders”).  I’d never read about Margaret Brent in a children’s book about the quest for the vote, so I particularly appreciated seeing her here.

The author, Deborah Kops, does a very good job of including interesting details in her coverage; for instance, she writes of Carrie Chapman Catt that “By 1890, she was so passionate about the cause that her second husband, George William Catt, had to agree she could work for women’s suffrage four months out of the year before she would marry him.”  However, there were also a few notable omissions.  For instance, Lucy Stone’s marriage isn’t mentioned in her profile.  This saddens me because I think it’s an excellent example of people refusing to be bound by convention and instead creating their own, more equal, relationship.  Perhaps instead of including a picture of Oberlin College, the biography could have been a touch more comprehensive.  (I may be biased, though, as a proud “Lucy Stoner” … she was the first recorded American woman to not take her husband’s name upon marriage, saying “A wife should no more take her husband’s name than he should hers.”)

Many of the images included are rarely seen in works of this type; for instance, Sojourner Truth is shown, with her knitting, in a color painting instead of the more common black-and-white photograph seen elsewhere in which she looks quite stern.  (And why, I wonder, do authors so rarely explain why people tend to look stern and serious in those early photographs, and why they’re all black-and-white instead of color images?  I’d think it would be both important and interesting for readers to know a bit about how photography worked in the early years!)  There’s a beautiful picture of women celebrating passage of the Nineteenth Amendment, photos from various stages of Jeanette Rankin’s life, etc.  I appreciated the book’s layout and visual appeal.  That said, more than half of the book’s space was taken up by images … I would have appreciated more text, but that’s probably the English major in me!

I definitely recommend People at the Center of Women’s Suffrage for any readers who are drawn toward learning more about individual people instead of reading about the movement as a whole. Reading about the experiences of specific women who were involved can be very compelling, and the women profiled provide a nice overview – we learn about Francis Willard, Anna Howard Shaw, Harriot Stanton Blach, Alva Belmont, and several others.  If the biographies are somewhat sparse, that’s a fault of the format rather than the author.

Unlike several of the other books I’ve profiled, People at the Center of Women’s Suffrage is still available (though Amazon warns that it could take 2-3 weeks for delivery); I’d encourage anyone creating a library of suffrage works for kids to seriously contemplate including this work. Book ordering information. 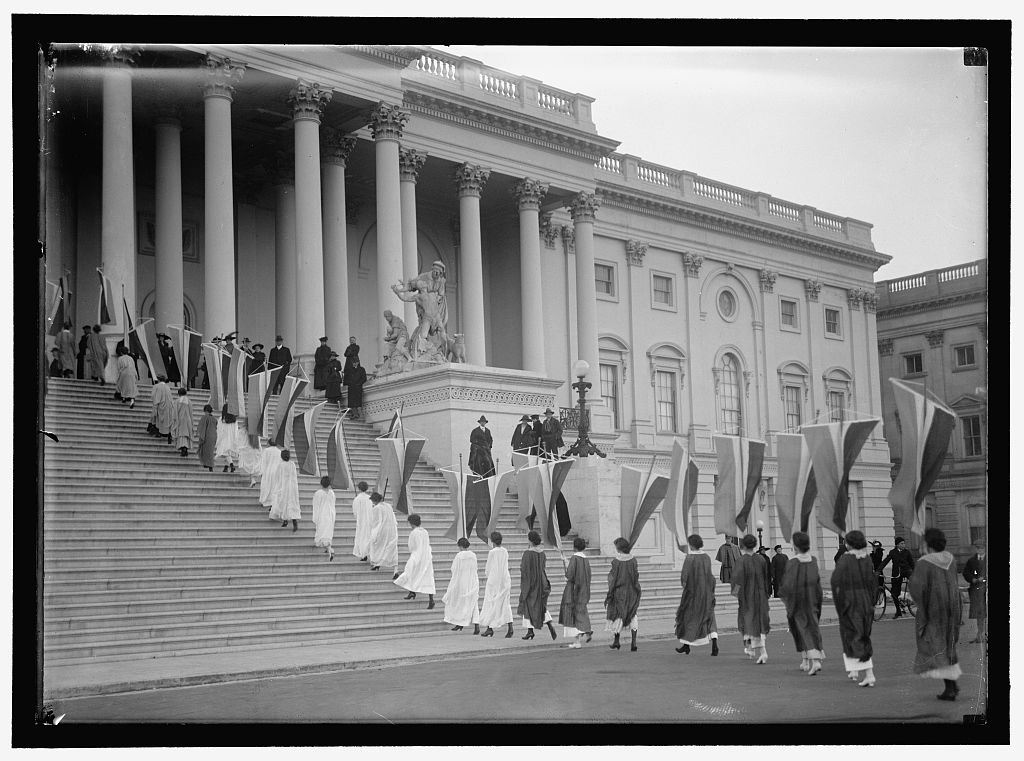