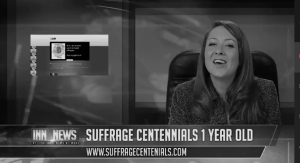 No one’s openly planning for New York’s 2017 suffrage centennial. Centennial awareness is out there, however, bubbling under the surface. What are the signs? How about a groundbreaking in Seneca Falls, New York for the National Women’s Hall of Fame that’s taking over the old Seneca Mill along the Cayuga-Seneca Canal, a historical location in its own right. Abolitionists and reformers Charles Hoskins and Jacob Chamberlain, the mill founders, signed the Declaration of Sentiments in 1848. Good news. . . because it sets the stage for what’s to come in New York in 2017 and then across the nation in 2020.

The National Women’s History Project is in the process of bringing together a wide coalition of people in support of strengthening public interest in Votes for Women history and the various advantages it will bring to old and young, communities and the nation in terms of education and economic development. The network is expected to be on the ground, up and running by this coming summer.

LetsRockTheCradle.com is putting New York under the microscope in terms of featured events, action campaigns, and featured suffrage activists. You can rock the cradle by following on Twitter or with an email subscription. The web site SuffrageCentennials.com is gearing up for a birthday party –its first.

And here’s a video for a quick reminder. Watch the app on LetsRockTheCradle that keeps track of the number of days until NYS’s women’s suffrage centennial: 965 days. Put that on your “to do” list.

Follow news and views of the suffrage movement and how it relates to us today. Subscribe to Suffrage Wagon News Channel for posts twice a week in your email, or Facebook or Twitter. Celebrate women’s freedom to vote.