A survey of suffrage videos! 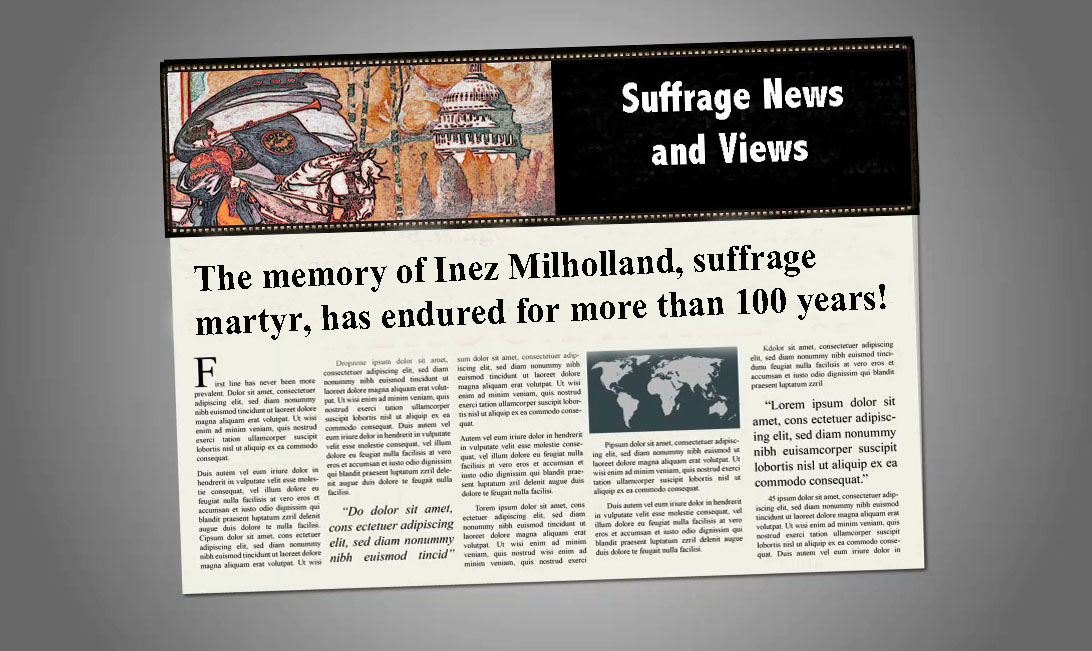 2016 film about Inez Milholland, the U.S. suffrage martyr. This 15-minute film in DVD form is available through: InezMilholland.org

The “Spirit of 1776” music video (2014) is a great resource for celebrating women’s history events. Check out Suffrage Wagon’s channels on Vimeo.

(1.)  The making of the music video about suffragist Alice Paul is NO LONGER available on YouTube. This music video was, for many, their first introduction to suffrage movement history. The video highlights included the suffragists’ picketing of the White House in 1917, U.S. President Woodrow  Wilson’s response to the suffrage movement, those opposed to the movement, as well as the vote in Tennessee that turned into the last round of the 72-year movement that achieved victory in 1920 when Tennessee state representative Harry Burn cast the deciding vote in the national ratification campaign.

Although the “Bad Romance: Women’s Suffrage” video by Soomo Publishing is in dispute because of copyright issues related to satire and parady, a video about the making of this video remains a peek into the background. Take a look!

(3.) “Iron Jawed Angels” is an HBO production from 2004 about Alice Paul, the National Woman’s Party, and the campaign to win the 19th amendment. In spite of the number of years this film has been around, it remains a favorite among organizations throughout the nation as a fundraiser, as well as with history teachers. There is considerable supplementary teaching material available, including Teach with Movies. This edited clip of the 1913 suffrage parade in Washington, DC provides a Hollywood version of the parade, though it’s particularly effective in illustrating the atmosphere and context of the event.

(4.) The classic film “Mary Poppins” was once the only opportunity for people to learn about the suffrage movement. The film takes place in England. See link for more information.
http://youtu.be/Kvk1NZDFvZU

(5.) This 13-minute instructional video, “Women’s Suffrage: Crash Course US History,” is useful for an overview, whether it’s for you or your class.

(6.) Spend less than five minutes with “Suffragettes in the Silent Cinema.” It’s a fascinating feature from “Women Make Movies.”

Other excellent documentaries include “California Women Win the Vote,” “One Woman, One Vote,” and others. Dutch women filmmakers featured suffragist Inez Milholland in the film “Ahoy!” Actual film footage of English suffragette Emily Davison, martyr for the suffrage cause, is considered essential when understanding the context of the international movement. “Vote for Them” by Slam Poet Carlos Andrés Gómez deals with suffragist Alice Paul as an appeal to young people to vote in 2012.

For the background on the documentary, “California Women Win the Vote,” see the article by filmmaker Martha Wheelock.

Because of copyright issues, the selection of the Ken Burns’ documentary about Susan B. Anthony and Elizabeth Cady Stanton (“Not for Ourselves Alone”) is no longer featured on YouTube. It may be available, however, on commercial video platforms. It’s worth seeing.